Revealed: the UK’s most dangerous industries for toxic gases

Contrary to popular belief, gas detectors are not classified as Category 3 Personal Protective Equipment (PPE). Weird right? But that doesn’t mean that they’re not important. They provide an effective warning system for workers operating in dangerous environments, so deciding on the type of gas detection system for your business isn’t always a decision you can make off the cuff.

Toxic gases are an extremely potent threat to health, and they’re a constant concern for a huge range of industries. Some sectors in particular, though, involve especially frequent risks for workers, sometimes even on a daily basis – which makes fixed gas detection alarms and portable gas detectors more important than ever. Here, we’ve detailed three of the most dangerous industries for toxic gases, and explored exactly what hazards make them quite so deadly.

Construction workers have to deal with a highly diverse range of toxic gas hazards, but one of the single most dangerous ones is also one of the most mundane: dust. Breathing construction dust can result in diseases like lung cancer, asthma, chronic obstructive pulmonary disease, and silicosis.

Workers also have to contend with harmful micro-organisms, including the legionella bacteria (frequently found in old, stagnant water), aspergillus, (which can be found in heating systems, air conditioning, and similar integrated systems), and asbestos. Asbestos was outlawed as a building material decades ago, but it’s still present in countless buildings constructed before 2000, making it an ever-present threat for people working in those buildings.

And of course, there are solvents. Sometimes known as VOCs, or volatile organic compounds, these are widely used in paints and emulsifiers. Its ability to effectively dissolve or dilute other substances also makes it a common ingredient in other construction products like paints, paint strippers, thinners and glues. The sheer variety of these hazards, in addition to the temporary nature of the work, means that portable gas detectors are an essential element of PPE for construction workers, or indeed anyone else whose work has the potential to affect the fabric of buildings. 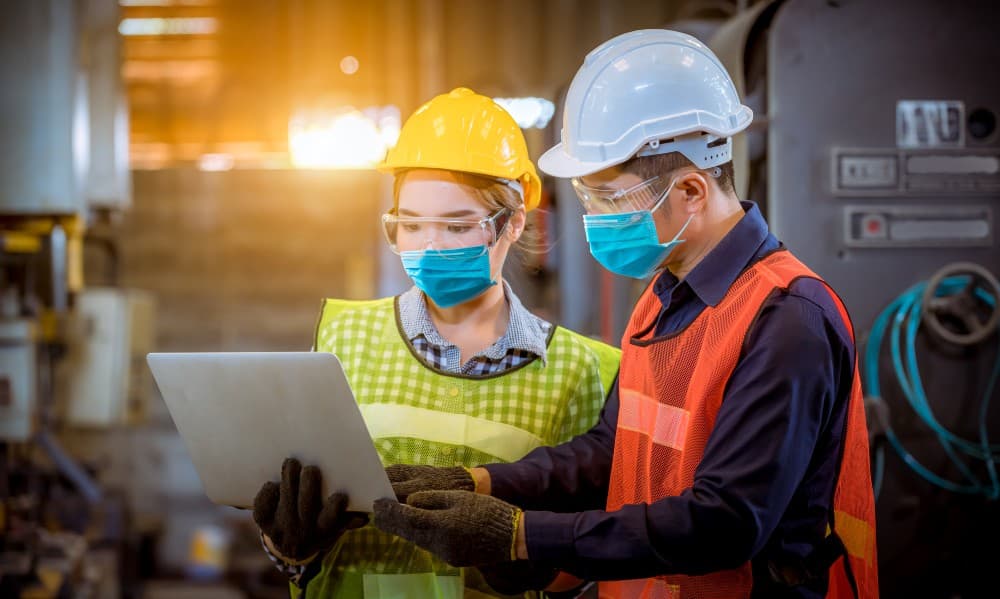 The oil and gas industry

This is one of the more obvious ones – after all, it’s right there in the name! The very nature of offshore drilling and exploration exposes workers to an extensive range of hazardous combustible and toxic gases. Some of the most prevalent include:

You’ll likely have already noted that some of these gases are easier to detect than others. Hydrogen sulphide has a very distinctive odour, comparable to that of rotten eggs. Carbon monoxide, on the other hand, is tasteless, colourless and odourless – all of which makes it especially deadly, as it can be nigh-on impossible for a human to detect alone until it’s already too late. Carbon monoxide is one of the many types of toxic gases that can cause permanent health issues and even death at worryingly low concentrations. Portable gas detectors are therefore vital for individual workers, while fixed gas detection systems are equally important for on-site facilities.

Many of the hazards that apply to the oil and gas industry also apply to mining – both involve drilling and exploration, and these activities can either release natural pockets of toxic gases embedded in the ground, or produce them on-site as a by-product of normal operations. Diesel and gasoline motors, for example, can create dangerous amounts of carbon monoxide if the proper precautions aren’t taken. Gases may also be produced by things like the decay of timbers, aftereffects of mine fires, and oxidation.

One of the main factors that makes toxic gases so hazardous in the mining industry is of course, the available space. Mining typically involves working in confined spaces, where gases have nowhere to disperse, resulting in dangerous build-ups of other gases like hydrogen sulphide, methane, carbon dioxide, and more.

Whether you work in these industries or not, it’s vital never to underestimate the sorts of risks they can pose. And if you ever find yourself in need of replacement portable gas detectors, that’s exactly what we’re here for. At Gas Alarm Systems we’ve got more than 25 years of experience in the design, development and maintenance of gas leak detection equipment. Feel free to take a look at our range of fixed gas detection systems or portable gas detectors, or if you have any questions or need any advice, by all means call us on 01423 862240, and we’ll be happy to see how we can help.